Like every year, the latest market data on the bioplastics in 2020 have been unveiled during the European Bioplastics association conference.

Estimated at a little more than 2 million tons, the global capacity of biobased and / or biodegradable polymers production (except for biobased PUR) represents less than one percent of the entire polymers produced annually. Despite a particular health situation, the development of these materials has continued in 2020 and the perspectives are encouraging with an increase of almost 36% by 2025. 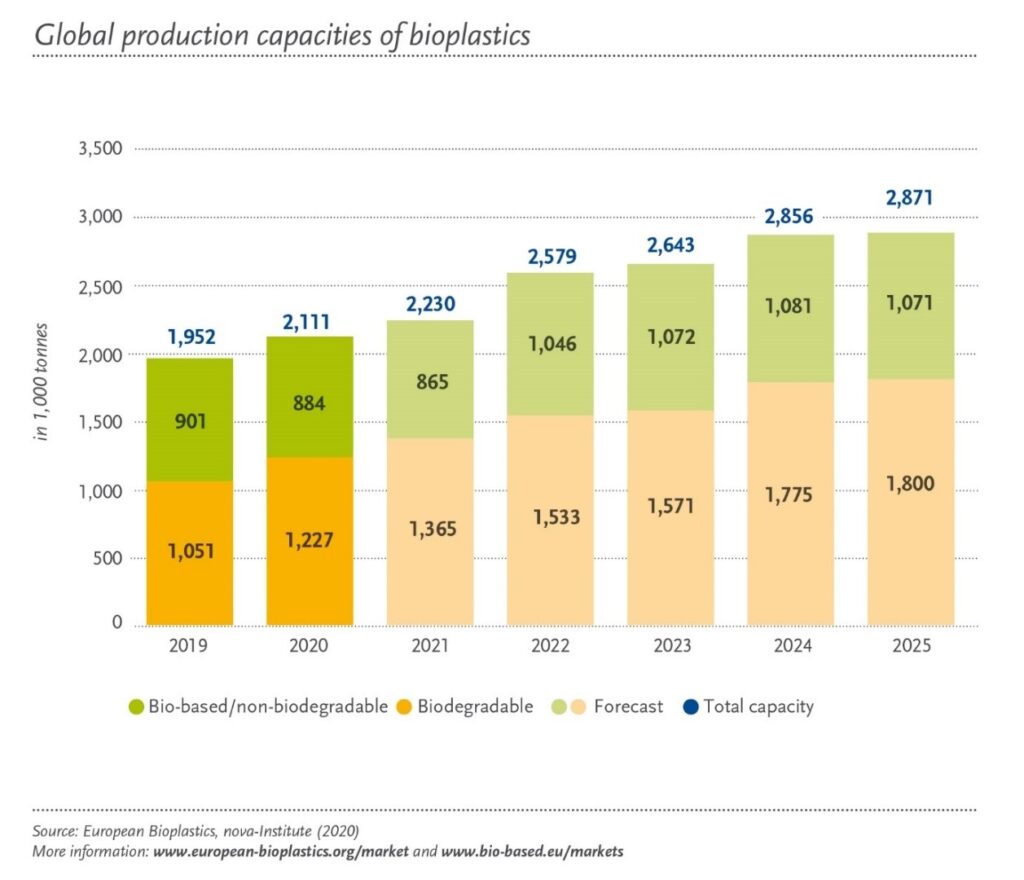 Bioplastics market in 2020, and then?

Still driven by the biodegradable starch blends, the market has seen the introduction of biobased PP. It can be used for numerous applications and it should see its sales increase significantly by 2025.

The demand for PLA (polylactic acid), a biobased and industrially compostable polymer has exploded these last couple years which lead to shortage in supply. Nonetheless, an increase of the production capacity in the USA, in Asia and then in Europe should allow to broaden the supply.

Finally, PHAs (polyhydroxyalcanoates), a family of very versatile polymers have continued to develop themselves, one of the reasons that will lead to a rise up to 1.8 million tons in 2025 of the biodegradable polymers production capacity (they represent today about 60% of the bioplastics produced). 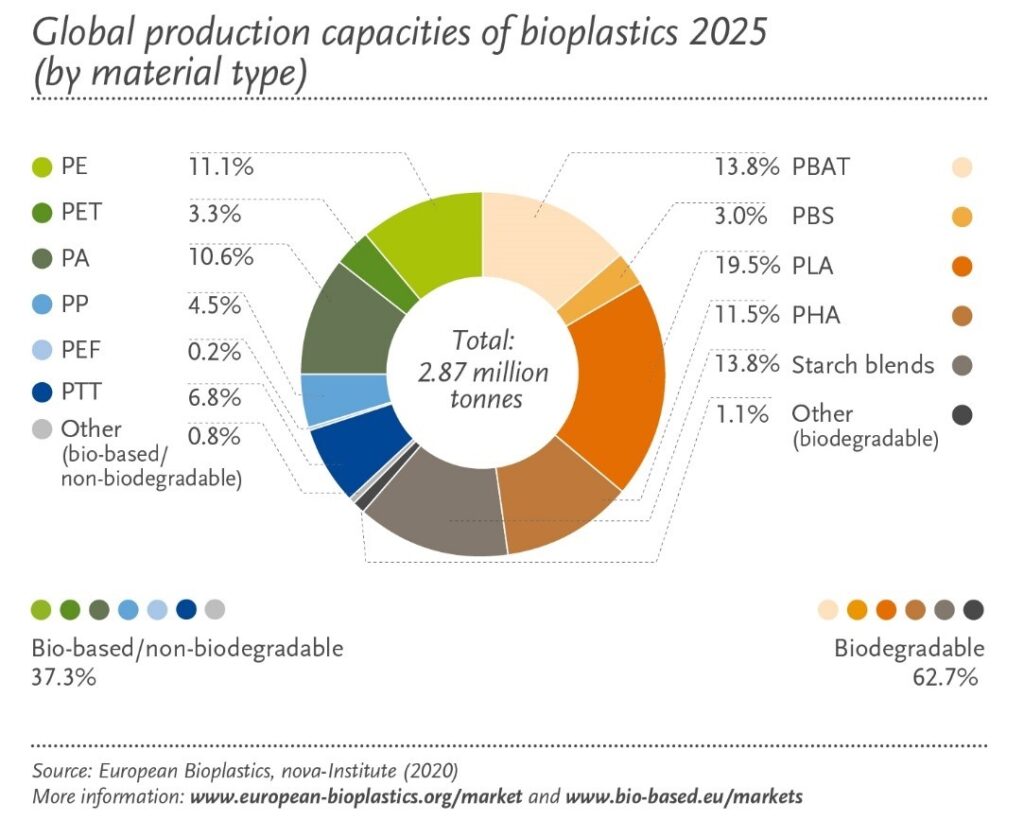 On the contrary, regarding the biobased polymers mainly composed by Polyethylene and Polyamides, the forecast for PET (terephthalate polyethylene) keeps diminishing tothe benefit of PEF (furanoate polyethylene). This last one has properties quite similar to PET but with more effective barrier and thermal properties.

Biopolymers are still found in a lot of sectors like packaging, textile, automotive and transportation, consumer goods or agriculture and horticulture. The packaging sector (rigid and soft) is still leader with more than 47% of the market shares in 2020: 1 million tons.

The production capacities increases should notably benefit to Europe which will go from 26% to 28% of the global volumes produced. 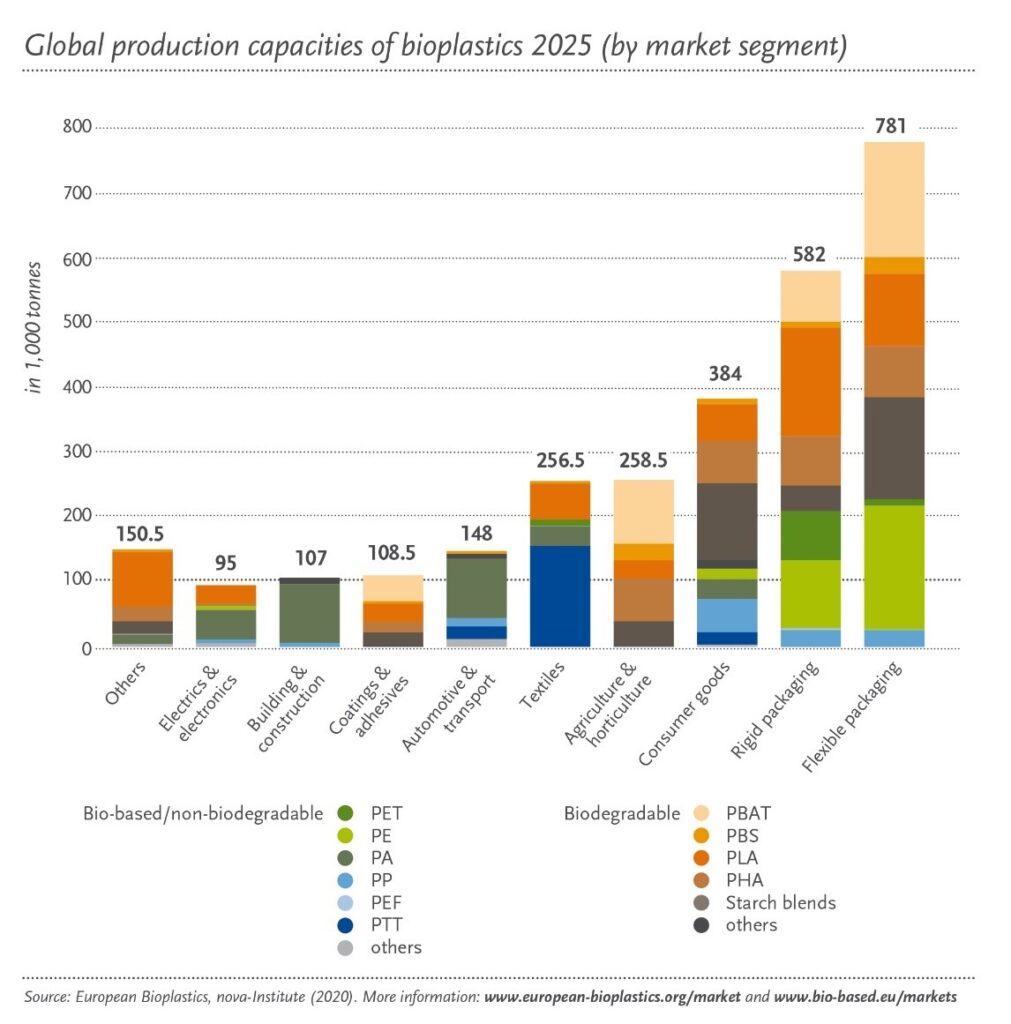 Indeed, the French government has an ambition to end the placing on the market of plastic single use packaging by 2040. In order to achieve this goal, objectives of reduction, reuse and recycling targets will be set by decree every five years to ease progressively the ban. Furthermore, this law foresees an objective of 100% recycled plastic by the 1st January 2025; objective which should be complicated to reach because of the great variety of plastic solutions present on the market and the recycle streams that are not always adapted to this diversity.

In addition to these measures, the list of banned products has been extended. Since the 1st January 2021, are not allowed to be put on the market, the following plastic products:

Derived from the work of the citizens’ Convention for the climate, the bill known as “law climate and resilience”, dealing with climate change and building resilience to its effects, was examined on the 10th February 2021 during the ministers Council.

This bill which will be defended at the beginning of March in front of the Parliament by the Minister of Ecological Transition Barbara Pompili, contains 65 articles. The aim is to deal with all the aspects of the daily life: consumption, production and work, travel, housing, food, but also the legal protection of the environment.

Although plastics are not directly named in the bill, some measures could have an impact on the materials and the evolution of the bill will thus be closely followed by all the persons in connection with plastic materials.