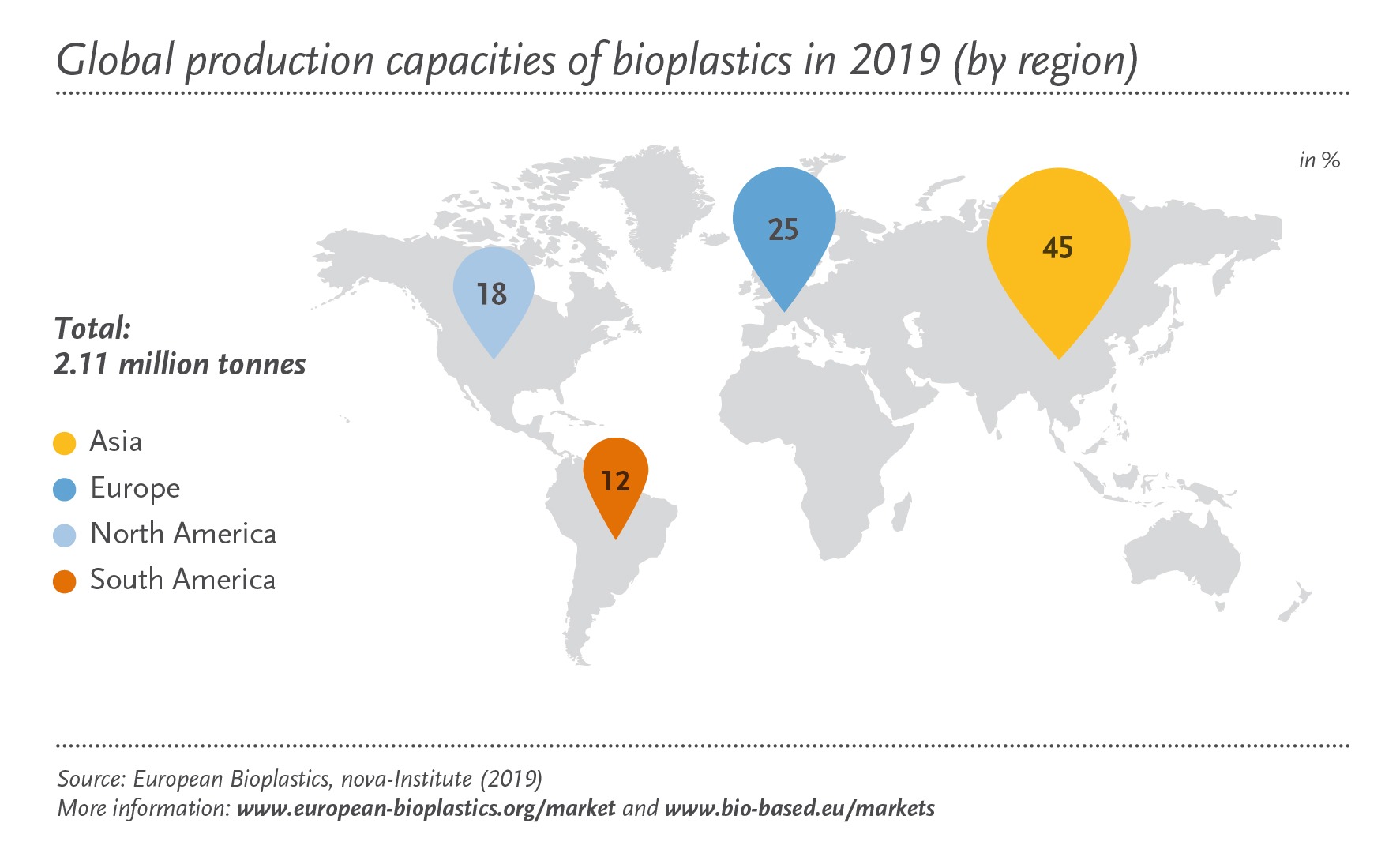 The bioplastics market is no exception, climate change and pollution of soils and oceans by plastics are burning issues at the moment. Society awareness is still going strong and more and more citizens wish that solutions are implemented to stem this problem.

Although petroleum-based plastics have a lot of bad press, bioplastics, including those biobased and / or biodegradable, have the wind in their sails and keep growing. Let’s go back to the latest trends of the market.

The transition towards a circular economy and a low carbon intensity, the consumers continuous demand for products more environmentally friendly as well as properties improvement and new functionalities are among the factors that lead a growth of 15% of the global production of bioplastics for the next five years. According to the latest forecast, it should reach 2.42 million tons in 2022. 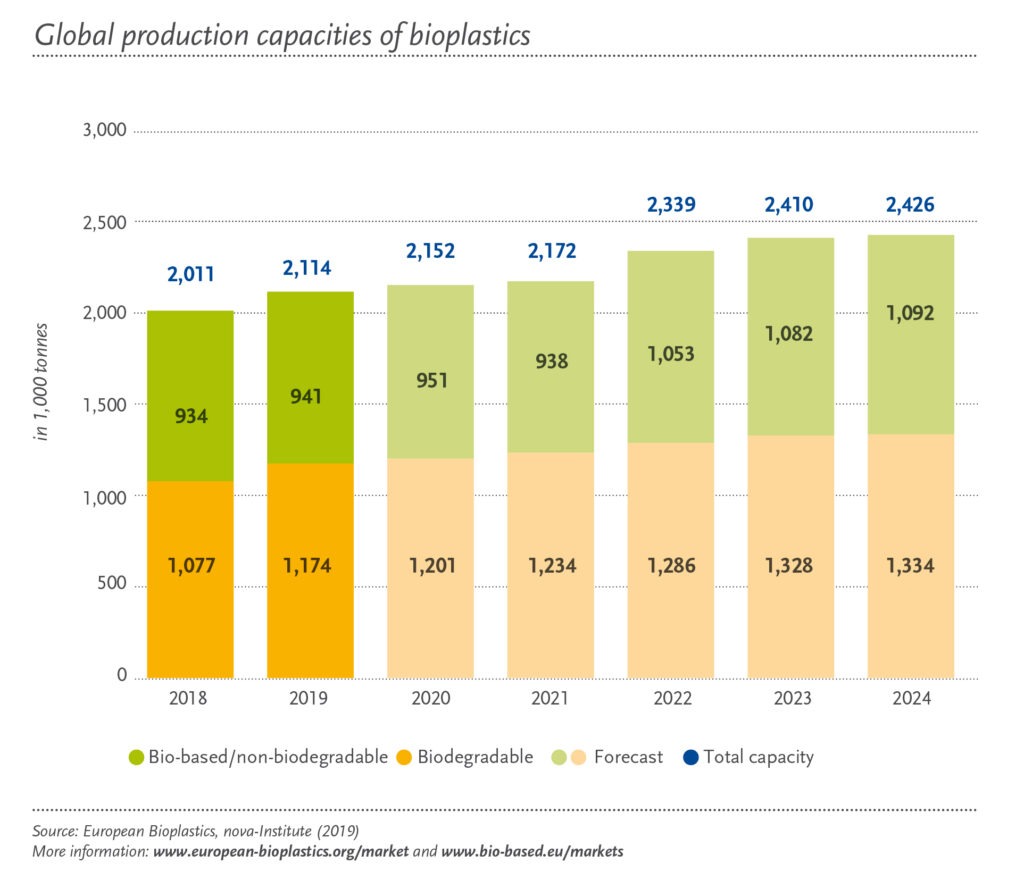 This growth is driven notably by Polyhydroxyalkanoates (PHA) which are biopolymers generating a lot of popularity today, and by the apparition on the market of biobased Polypropylene. PP is a polymer currently widely used for numerous applications thanks to its versatile properties such as its rigidity, impact resistance and easy processing. Biobased PP, having the same properties as its petroleum counterpart, should have its production capacities multiplied by 6 by 2024. For its part, the PHAs family continues its development and growth further, its production capacities increasing from 25 320 tons to 160 00 tons in 2024.

When one is looking at biobased and non-biodegradable polymers (representing around 44% of bioplastics), the forecasts for the next five years show an increase in the biobased PE quantities available. On the contrary, the volume of the partially biobased PET should decrease (from 206 780 tons in 2019 to 145 220 tons in 2024) for the benefit of PEF whose market entry should be in 2023. This last one has similar properties to PET but with more effective barrier and thermal properties.

Versions of 100% biobased PET are also studied and should be available in the horizon 2025, concentrating thus the R&D efforts. The recyclable aspect of these materials in the existing streams is more and more seen as a major asset in waste management. 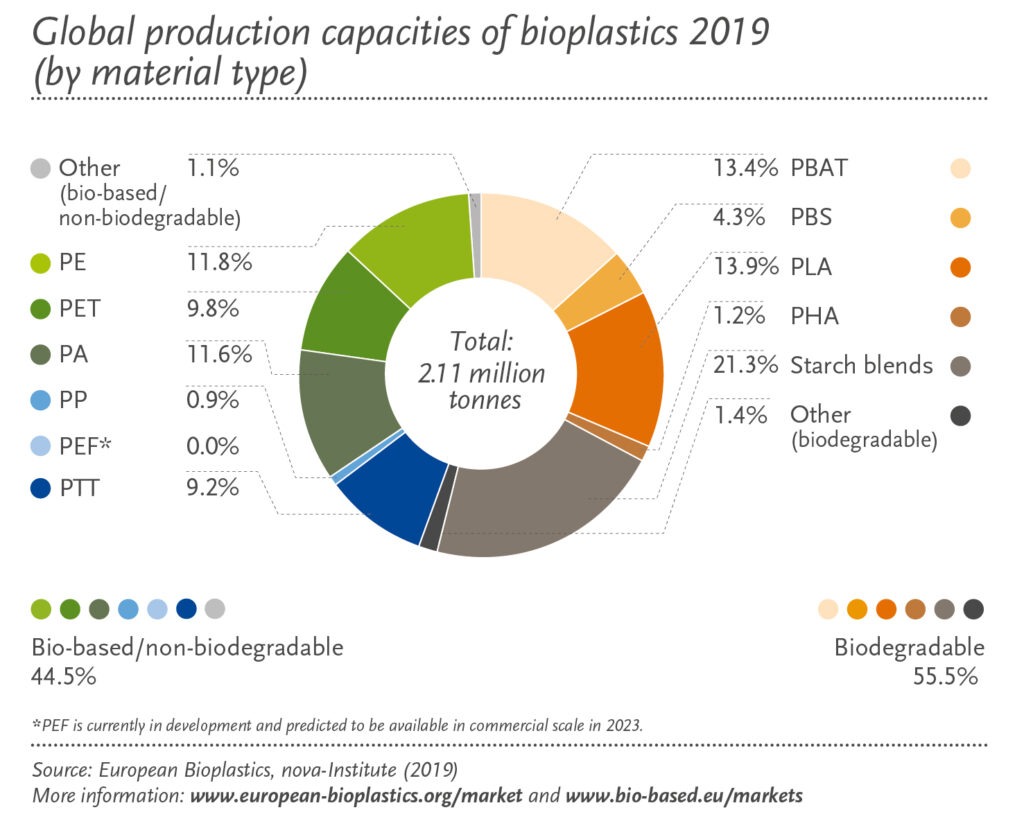 Regarding biodegradable polymers, the market is dominated by starch compounds, PLA and PBAT. During the next years, the trends should not change and they should represent 55% of the bioplastics market in 2024. The capacity to biodegrade is, today, a functionality highly required in more and more applications where products can be found in nature after their use. Biodegradation in aquatic media is thus, studied in a lot of projects.

Bioplastics can still be found in numerous sectors such as packaging, textile, consumer goods, automotive and transportation, agriculture and horticulture. The packaging field (rigid and soft) is still leader with almost 53% of the market share in 2019 (1.14 million tons). 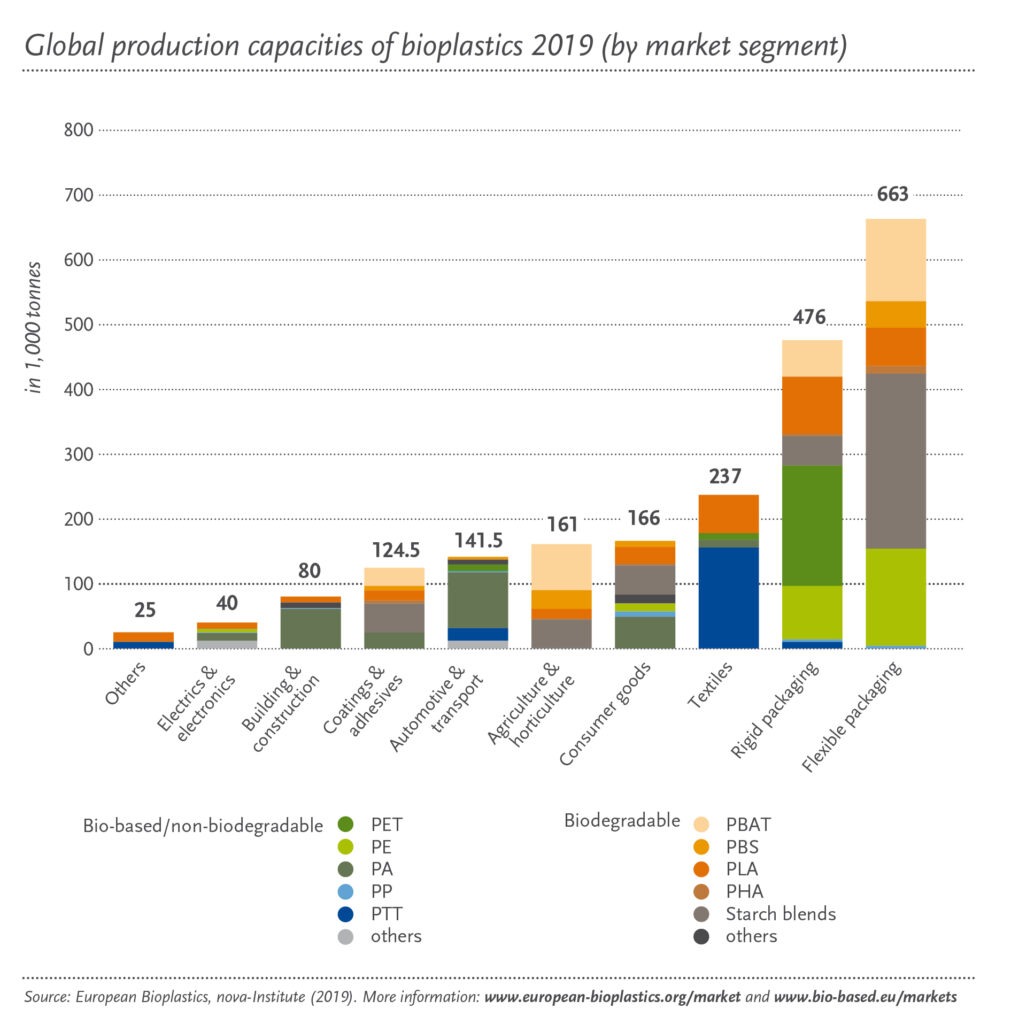 Contrary to some beliefs, lands used to grow the renewable feedstock for the production of biobased plastics are not in competition with the other uses of arable lands. Indeed, only 0.016% of the arable soils (0.8 million hectares) are used for the production of raw materials for the biobased plastics against 70% for pasture and 26% for the agricultural land. The rise of the bioplastics will not increase the area of necessary land for its production. Indeed, in 2024, arable lands to produce this family of bioplastics are estimated to 0.021%. 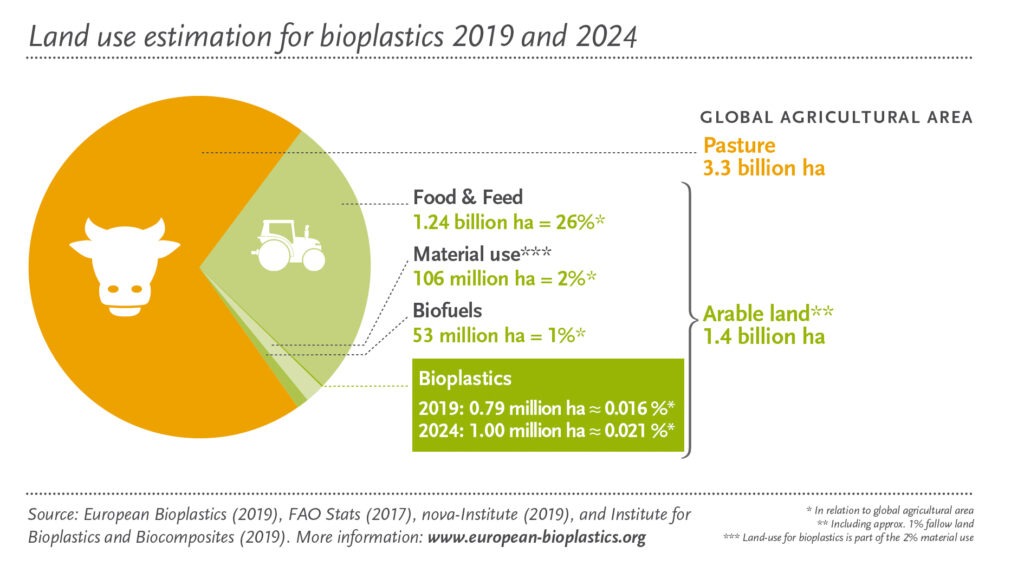 Furthermore, with the use of second and third generation biomass currently industrialized, raw materials from wood, micro-algae or waste will need less and less lands for its production.